Getting to Know Culligan: A History of Service, A Legacy of Expertise

Culligan has come a long way since its beginnings under founder, Emmett Culligan in 1936. He started his company with a simple goal — help people access better, safer water. It’s a message and a mission that has united Culligan and guided both our corporate entity and your local [dealer info=”dealer”] around the country since its inception.

This idea continues to play a pivotal role in helping us align our values as an organization while we grow, and ground us in the importance of the work we do for local communities.

From the early days of his company, Emmett Culligan believed in the importance of the work he was doing — that better water could lay the foundation for a better life. At a time when the middle class was expanding, he knew he could do even more to make life for everyday Americans better, starting with the water they drank and used in their homes.

He also appreciated the health benefits that access to clean, filtered water could bestow, and long before hydration held the place it does now in the cannon of healthy living, Emmett lived with an uncommon commitment to hydration. He understood that good quality water facilitated everything from longer life to better athletic performance, resilient, youthful skin, and so much more, and sought to bring those benefits to every home and community Culligan served.

It also became clear to him that softened and filtered water could make life easier, and more luxurious in the home. From easing the burden of cleaning and everyday housework, to helping laundry feel and look its best, Culligan knew soft water could be an affordable luxury for many Americans. He also knew that people wanted to feel confident in who they were filtering their water with – that it wasn’t just a product, but a service people would depend on and trust to local professionals. Some who were just as committed to their neighborhoods as they were — because they lived there, too.

For his ideas to reach beyond his original Illinois headquarters, however, he recognized he needed to establish a franchise model that built on his commitment to water and its benefits, and the service that should come with improving your home’s water quality. He knew how important local expertise was when it came to water, and how much local knowledge could further help homeowners across the midwest, and eventually the entire United States.

It was this vision — for local knowledge, and especially local water quality understanding —that eventually established the franchise model that today, helps Culligan remain leaders in local water quality.  Then, as now, Culligan men and women are not only professional water quality experts, they’re neighbors and friends who live and work in the communities they serve. Many of our franchises remain family-owned and operated, some, like the original Culligan in Rosemont, Il, passed down from generation to generation.

By focusing on water, its quality, and the people who can deliver, soften, and filter it, Culligan’s legacy of bringing better water to people everywhere endures through local dealers that understand the value of the water itself, and the service that stands behind it.

Are you sending money down the drain every month? Chances are you might be without even realizing it. Water makes up the second largest utility expense for most households in the area, and there are many factors that make your bill higher than it needs to be.

Save on Your Water Bill by Checking Pipes and Appliances

Leaky pipes cost homeowners hundreds of dollars every year, and often more. The best way to save water here is to inspect your plumbing regularly and check faucets for drips to make sure you’re not wasting water without realizing it:

Appliances are another big culprit when it comes to unnecessary water usage. Older appliances especially have a higher tendency to leak and use more water than needed. The three biggest water wasters are typically toilets, faucets, and dishwasher, but don’t forget to check under-the-radar water appliances like air conditioners, water heaters, sprinkler systems, and refrigerators. It’s worth it to look into upgrading to Energy-Star certified appliances, or at least make sure you’re on top of the required maintenance for all your water-using appliances. 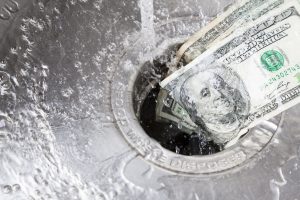 Remember to use cold water when running your garbage disposal.

Looking to stop extra spending in your bathroom starts with the toilet —  install a low-flow toilet if you can. These reduce the amount of water used with each flush, saving you money each flush that really adds up. If a new toilet isn’t in the budget, add weights to the toilet tank to achieve similar results.  You can also adopt a more laissez-faire attitude about flushing, if you haven’t already, to help cut down on non-essential water usage.

Another way to reduce your water usage in the bathroom is to place a basin or bucket in the shower.  Then, after your next morning routine, you’ll have water ready for house plants or gardens that would otherwise go to waste.

Saving Water in the Kitchen and Laundry Room 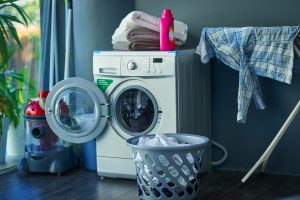 According to Energy Star, older top-loading machines use around 40 gallons of water to wash a full load of clothes.

Save on your water bill in the kitchen by using the dishwasher, if you have it. Running a dishwasher with a full load of dishes is more effective and efficient than doing dishes by hand.  If you don’t have a dishwasher, find and keep a good basin or bucket in your sink to catch and reduce the amount of wasted water when hand-washing.

Stay hydrated and save more water by keeping water bottles or a pitcher in the fridge — that way you’re not running the tap, and wasting water, waiting for it to get ice cold before you fill your glass.

You can also consider composting your food waste rather than sending it down the garbage disposal.

Not only will this spare your disposal a lot of wear and tear, it also helps prevent the extra water usage disposals need to process peelings and other food products.

In the laundry room, wash clothes on a cold or tap water setting — using hot water for your laundry is usually unnecessary and consumes a lot more energy than tap-temperature water.

Using a few of these simple tips can help you save water — and money — all around your home. And if you’re looking for even more ways to improve your household water efficiency, contact your local Culligan dealer for ideas, today!

Sacramento Area: The Importance of Water Quality in Assisted Living

When you think of a place where delicate hearts and minds need special care, what is your first thought?

If you were thinking about a school, you’re likely not alone. But there is a certain faction at the opposite end of the spectrum where such a need also applies. 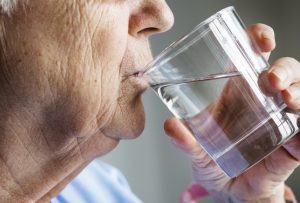 Whether you already have a loved one in an assisted living residence in the, or you are in the phase of choosing one, what questions should you be asking about the facilities and its water supply?

How old is your targeted assisted living establishment? Many nursing homes are built on private well sites, which do not require any regulation from the EPA. While the majority of documentation as related to lead poisoning is with children, lead is not good for anyone, particularly seniors with weaker immune systems.

Ask the provider if the facility is on municipal water or if it has its own system. If the nursing home does use well water, does it have proper prevention measures in place, such as backflow prevention devices, updated well caps that are vented, insect and vermin proof.

Contingency and emergency planning for possible contamination is also important, as there should be alternative options available in the event of a well problem.

Legionnaire’s is an atypical pneumonia caused by bacteria found in fresh water. Outbreaks of the disease in nursing homes have been well-documented over the past decade in the news, particularly when deaths are involved.

A study in 2015 of more than 2,800 cases of the disease found that 533 (19%) of cases occurred specifically in a health care facility, such as a hospital and nursing home.

The CDC has openly requested that all health care facilities do more to protect its plumbing systems from possible contamination. Ask your facility provider to provide you details on how regularly the disinfectant and chemical levels are monitored.

Other naturally-occurring pathogens can cause issues with impaired immune systems, such as the elderly. Generally, Americans are growing worried about polluted drinking water. Many nursing homes use on-tap filtered water systems and/or have bottled water delivery on hand for its residents to have easy access to.

Ask if the assisted living establishment your loved ones are considering are residing in uses a filter system. Taking care of one of the most essential elements for sustainable human life can help establish trust between all parties involved. A facility that invests in the health of its residents is a good sign that it takes itself seriously as an establishment.